NTTC manages the Territory's exposure to funding risk by ensuring the Territory Government is not exposed to a significant refinancing risk in any financial year.

NTTC's approach to minimising funding risk involves the diversification of borrowing and investment activities across the maturity spectrum and utilising a variety of funding sources to meet NTTC's requirements.

The primary source of funding for NTTC is Australian dollar denominated bonds issued in the wholesale market via syndication. In executing its borrowing program, NTTC’s strategy is to issue larger benchmark bond lines with a minimum balance of $500 million to meet investor demand for greater liquidity and to promote market awareness.

In addition to issuing benchmark bonds, private placements are used by NTTC to satisfy specific funding needs. Private placements are attractive because of the ease of issuance, which makes them suitable for small parcels of debt and their flexibility for tailoring to domestic market movements and investor demand.

NTTC's short-term funding requirements are met through its promissory note facility. The notes are issued by way of tender, using ASX (Austraclear Services Limited) as the issuing, lodging, recording and paying agent.

Territory Bonds is NTTC's retail fixed interest borrowing product and is used to attract funds from the general public. Territory Bonds have been issued since 1979 and are offered to investors seeking a safe, secure, government-guaranteed investment. 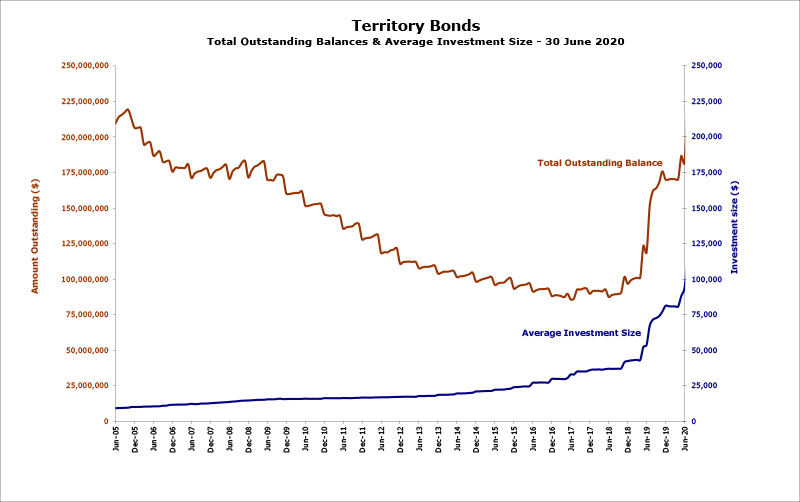 NTTC borrows funds from the domestic and international financial markets by offering a range of financial products. The funds raised by NTTC assist to finance the Territory’s infrastructure requirements such as housing, transport, health and education services.

NTTC is rated Aa3 by Moody’s Investors Service with a stable outlook.

All obligations incurred or assumed by NTTC are guaranteed by the Treasurer on behalf of the Territory under section 20 of the Northern Territory Treasury Corporation Act 1994.

On 9 December 2008, amendments to s.128F of the Income Tax Assessment Act 1936 came into effect to allow bonds issued in Australia by state and territory central borrowing authorities to be eligible for exemption from interest withholding tax (IWT).

The amendments apply to interest/coupon payments made on or after 9 December 2008, which means all domestic bonds, whether issued before or after that date, are eligible. The amendments do not necessarily exempt all bonds currently on issue, rather only those securities that otherwise meet the requirements of s.128F, specifically the public offer test.

In order to assist Australian custodians and paying agents holding bonds on behalf of offshore counterparties, NTTC wishes to make the following clarifications.

NTTC considers the following select lines of stock satisfy the relevant requirements of s.128F and are therefore exempt from IWT:

NTTC has a number of smaller issues of domestic bonds outstanding that are not part of its domestic select lines of stock. NTTC cannot at this stage make any definitive statements regarding eligibility of these securities for the IWT exemption. Any domestic custodians holding such stock on behalf of offshore parties should contact NTTC on a case-by-case basis to clarify IWT status of these securities.

Related information
Back to top